ESPORTS ATHLETES TRAIN IN ROTORUA FOR THEIR BIG BREAK 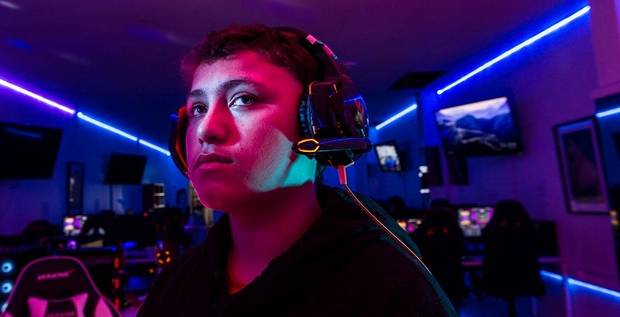 The dream is real and is something a bunch of locals strive for everyday while sitting behind screens in a darkened room with fluorescent lights all around.

These people are training. It’s serious. They have big dreams.

They are – brace yourselves parents – playing Fortnite and other popular online games.

Without getting too technical, Fortnite sees your character dropped in a map, pitting you against other players until one person remains.

Mikaere is the esports co-ordinator for Digital Natives Academy, a charitable trust established in 2014 to encourage young people to further their digital skills.

The hub is in a building on Rotorua’s Hinemoa St that works in tandem with Digital Base Camp, across the road, and strives to teach people to not just be users of digital technology, but creators.

A career in esports wasn’t considered realistic less than five years ago, but today, professional gaming teams are making as much as All Blacks and NBA players.

Top international gamers are earning more than $2 million a year from prizemoney, while some professional teams have shared winnings of up to $20 million a year.

New Zealand’s gaming market is nowhere near that level but Kiwi gamers could be offered full-time esports contracts in the not-so-distant future.

That’s where Mikaere comes in. He’s busy preparing for that day and says Rotorua has the talent to do it.

One of those talented gamers hoping to go pro is 14-year-old Mansel Green.

The Rotorua teen estimates he’s spent 1000 hours over the last 10 months playing Fortnite. That equates to about 25 hours a week.

“I learned about Fortnite when it started blowing up and I was watching other people play then decided to give it a go myself.

“My main goal is definitely to go pro. It takes a lot of effort but it’s a real career path for me. When people question it I tell them the top Fortnite player makes $500,000 a month and they’re blown away.”

Mikaere and his team at DNA have just pulled off somewhat of a coup for not only Rotorua but New Zealand by hosting the $25,000 Fortnite Tournament.

Players from all around the world hooked into the Rotorua-hosted event for a prize pool of $25,000.

Nine from the area qualified for the finals – not a bad effort considering more than 600 players registered.

Green, who was too young to compete in the tournament, was challenged by the player who placed sixth and beat him.

“I think I was able to get so good at the game because of all the encouragement and support I get,” Green said.

“School wasn’t really for me so it’s good I found something I can make a career out of that I enjoy doing.”

For Rotorua, the Fortnite Tournament meant DNA gained a lot of exposure internationally which is gold for funding and sponsorship offers.

For outsiders looking in, it’s all a bizarre new world.

You have competitors with game names like twitch/goyu, lolhazzeren, Bio Titan Gaming and aR-Pumps. What do those words even mean?

But if you jump onto the DNA Esports Gaming Facebook page, you’ll see the tournament was as serious as any other competitive sporting event, complete with supporters, live streams and regular daily updates and professional live interviews about the competition and the sport.

Mikaere said there were age restrictions, adult supervision and professional coaching that ensured everyone was well fed, watered and had adequate time away from the screens.

The prospect of making a career out of playing video games may seem ridiculous to some, but Mikaere and his team know it’s a real possibility – similar in a way to professional poker players.

“Parents always say ‘get outside and play’. My mum was one of those parents but they change their minds when the cheques start rolling in.”

“We want to be the All Blacks in esports but we don’t want to wait for Japan and America to come and get our talent, we want to set it up here.”